I wrote previously on preparing for my first gig. Now that the gig is over and done with, here are some thoughts on how it went.

I spend my days in the world of software and one thing that is often done in that universe is a Retrospective where we pause and ask questions like, "What went well?" "What did not go so well?" "How can we do it better next time?" I do this in various other areas of my life. With my family, we do this on a somewhat regular basis - we call it "Family Meeting". And sometimes we do it for events, like a holiday or a vacation. So it's only natural to retro on my first gig.

I was very well prepared. I had rehearsed all my songs several times. I practiced setting up my gear and playing through it (this is borrowed gear, keep in mind). I had a good list of songs and the order was reshuffled several times.

My wardrobe was also good, although I may have been overdressed. Better than being underdressed!

What did not go so well

I did get there early, but it took awhile to set up all my equipment and by the time I was all set up, it was go time. I prefer to have a little bit more of a buffer before I have to start.

I prepared for a concert, not a gig at a coffee shop/bar. That may seem like a subtle difference, but it turned out to be quite significant. It turns out that people really only half listen to the music at a coffee shop. They are really there to hang out with their friends and chat, and drink coffee. So, rehearsing introductions to songs and transitions between songs was a waste of time. Nobody was really listening while I was talking. There were a couple of times when I told a joke or asked a question and sometimes some people where paying attention. But basically, everyone was talking.

In fact there were several times when I finished a song and all I got back from everyone there was crickets. Other times, people clapped (sometimes politely). And sometimes, folks belatedly clapped. (As in, Oh, I just realized there is no more music, the song must be over. 👏👏👏)

Also, I have done some social justice type songs on my channel and I realized while those are good songs, they may not be the best songs for this type of venue. People really are there to just drink a beer and chat with friends and enjoy themselves. Which is totally fine. Some songs may not really fit that vibe.

What can I do better next time?

Don't sweat the time in between songs as much. If everyone is quiet and listening, well then maybe I need a Dad joke or a story ready to go, but I don't need to worry about that until it actually happens.

Choose songs that are really more about the fun and happy things in life. While We Shall Overcome is a great song, it's probably not the best fit for this type of a gig.

This was not mentioned in the "What did not go so well" section, but I would like to memorize as least some of my songs. I didn't really have any memorized. I definitely can do better in this area.

Overall take-away from the gig? It really was awesome and I had a lot of fun. And I plan on doing it again soon. And most importantly, I learned a lot in the process. There are a few things I can tweak so that I can do even better next time!

When I started recording videos back in August of 2020, I quickly realized that my voice needed work. It would crack at inopportune moments, or I couldn't really reach the high parts I wanted to reach, or I was just simply singing off tune. Now, I know that autotune is 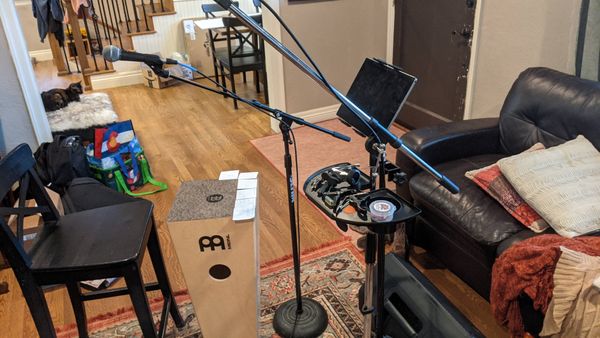 Balancing a part time music career with a full time job and a family takes careful planning, so that none of those get left out.

I'm playing at the Table Public House on April 24th from 3-5pm. Hope to see you there!